After a successful in-person conference, we are looking forward to the 2023 conference. As an integral part of Georgia’s literacy initiative for more than half a century, the Georgia Conference on Children’s Literature draws hundreds of teachers, school media specialists, public librarians, authors, illustrators, and children’s literature scholars from the Southeast and beyond. The conference also hosts the finals of the annual Helen Ruffin Reading Bowl, a statewide competition for students in grades 4–12.

The 54th Georgia Conference on Children’s Literature is pleased to be hosting “The Welcoming Library” exhibit, a pop-up conversation on immigration and our new generation communities driven by a collection of acclaimed picture books featuring New Arrival and New Generation families. Readers of all ages “meet” these families on the page and explore the commonalities shared by all families through “I’m Your Neighbor” Books-created discussion questions as well as companion programming and education materials to help build an environment of welcoming and belonging.

Victoria Jamieson and Omar Mohamed’s collaboration When Stars Are Scattered is one story listed by “I’m Your Neighbor” as fostering conversations about refugees and recent immigrants. Join us March 17–18, 2023, to listen to Omar and Victoria share about When Stars Are Scattered and to learn from two representatives from “I’m Your Neighbor” : Kirsten Cappy and Anne Sibley O’Brien!

The conference is also closely connected to the Georgia Children’s Book Awards .

Earlybird pricing ends February 11th, so be sure to register early! If you are presenting at the conference, AND you register on or before January 31, 2023, you receive an additional discount off the registration fee!

Kirsten Cappy co-founded I’m Your Neighbor Books in 2012. She brings 20 years of experience using children’s books and the companion tools she creates to increase curiosity, empathy, and cultural competency. Kirsten was named one of the Boston Globe’s Everyday Heroes for her work on the Welcoming Library, a traveling collection of acclaimed picture books featuring New Arrival and New Generation families that inspire conversations about immigration.

Reem Faruqi is the award-winning children’s book author of Lailah’s Lunchbox, a book based on her own experiences as a young Muslim girl immigrating to the United States. She’s also the author of Amira’s Picture Day, I Can Help, and two middle grade novels in verse, Unsettled and Golden Girl, which all got starred reviews. Reem Faruqi lives in Atlanta with her husband and three daughters.

Victoria Jamieson grew up in Pennsylvania, where she wrote and illustrated her first book in the third grade. She attended the Rhode Island School of Design, but soon found herself drawn back towards illustration instead of animation. After graduation she began working as a book designer with HarperCollins Children’s Books in New York. Roller Girl (2015) was a Newbery Honor Award Winner and New York Times bestseller. Her graphic novel, When Stars Are Scattered (2020), co-authored by Omar Mohamed, was the 2022 Georgia Children’s Book Award winner.

Omar Mohamed spent his childhood at the Dadaab camp, after his father was killed and he was separated from his mother in Somalia. He devoted everything to taking care of his younger brother, Hassan, and to pursuing his education. He now lives in Lancaster, Pennsylvania, with his wife and five children, and works at a center to help resettle other refugees. He is the founder of Refugee Strong, a nonprofit organization that empowers students living in refugee camps.

Karl Newson is the best-selling author of the 2022 Georgia Children’s Book Award winner I Am a Tiger. His other creations include I Really Really Need a Wee, The Same But Different Too, The Hat Full of Secrets, and most recently the picture books I’ll Be There and The World at Your Feet, plus many more! His stories have been translated in 29 languages around the world. Karl grew up in Norwich, England, and was inspired to write his first story when his children were small; he’s been writing stories ever since.

Anne Sibley O’Brien is a children’s book creator who has illustrated thirty-six picture books. She is the author of fourteen of those books, including I’m New Here (2015) and Someone New (2018), both of which received starred reviews from Kirkus. She has also written three recent picture books which she did not illustrate: Abracadabra, It’s Spring! and Hocus Pocus, It’s Fall! (2016), both illustrated by Susan Gal, and Circle Round (2021), illustrated by Hanna Cha. In addition to creating books, she is a cofounder of two projects featuring diverse books: I’m Your Neighbor Books , and the Diverse BookFinder .

By donating to the Georgia Book Awards and Conference on Children’s Literature , you are supporting a 50-year legacy of celebrating quality children’s books for Georgia students. 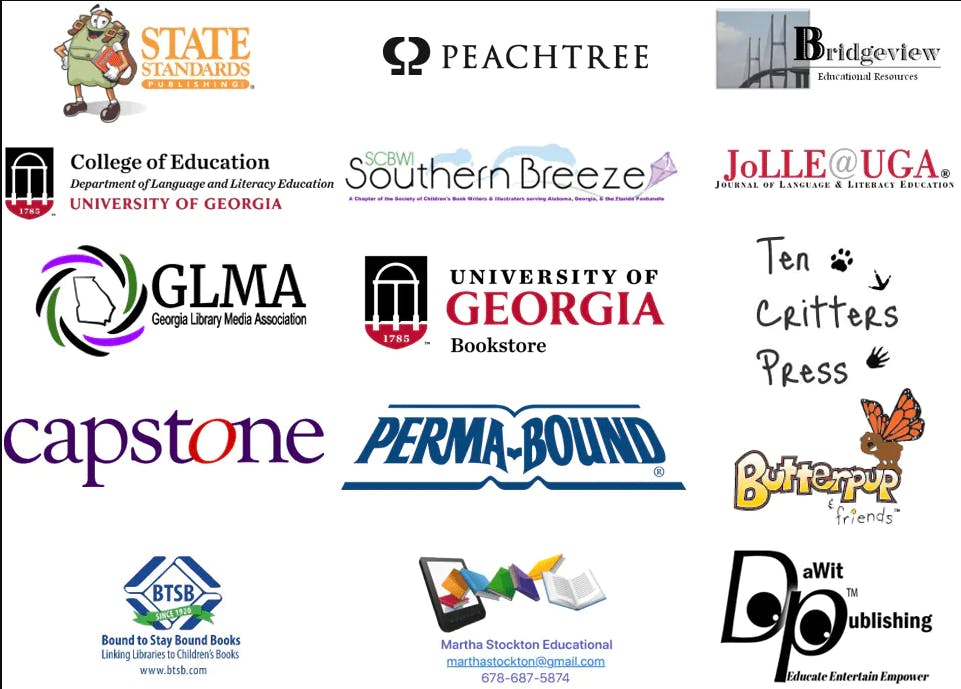 I love this conference! I always learn something and come away energized.

After a two-year absence from the conference, it was GREAT to be back! I am retired now but still LOVE to attend. It’s always inspiring to meet the authors and illustrators who are forever my HEROES!

Out of all the conferences I’ve attended, this one is the best! What other conferences is there a chance you will be on the elevator with an author/illustrator or even have one come to your table and sit down with you?