A call to be 'Joshuas and Joshu-ettes'

When the superintendent of the DeKalb County School District looked for an example of someone today's University of Georgia students can emulate, he looked no further than a woman seated just a few feet away. 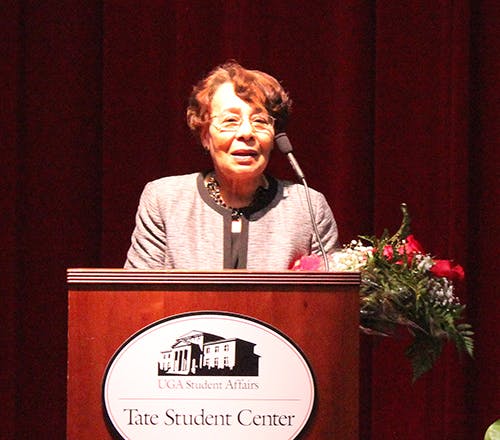 Michael Thurmond, an Athens native who was the first African-American from Clarke County elected to the Georgia General Assembly since the Reconstruction era, was the speaker for the 2015 Mary Frances Early Lecture. The event is sponsored by the Graduate and Professional Scholars organization and the UGA Graduate School.

As Thurmond touched on topics meant to inspire undergraduates to become our country's future leaders, he looked to Early as a model of courage and strength.

Early was the first African-American to graduate from the University of Georgia, receiving her educational specialist degree in music education in 1962. Thurmond said even though Early's act seems simple today, it was a groundbreaking effort made with determination and grace.

"It may be difficult for the younger members of this audience to comprehend the accomplishment of Ms. Early's achievement at UGA," said Thurmond, speaking to a crowd of more than 100 at the Tate Student Center Theater. "Dr. Early, thank you for your courage, intelligence and determination. Thank you for ensuring that the stain of legalized segregation is forever removed from the black and red of the university."

Thurmond's message to the students in the audience recalled Early's accomplishment: We are all in this together to make the world a better place, and we can only do that when we stand up for what is right.

It's a realization Thurmond said he only found in the past few years, working for one of the largest school districts in the state.

Recalling the words of Dr. Martin Luther King Jr., Thurmond reminded the audience that the most damaging deeds aren't committed when people speak, but when people are silent to the injustices around them. Just as Early spoke up about the injustice in the admissions at UGA, he said it was up to future leaders to speak up about injustices they see in their own lives. 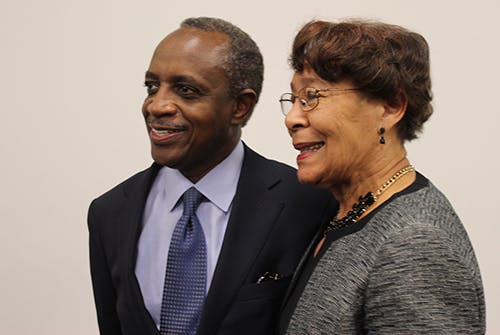 It's a concept Thurmond called "enlightened self-interest." It's not just about you and your immediate family, but also about taking an interest in your community—your life or your business—and the people in it.

"That helps my wife and I to know that graduating our daughter from UGA isn't enough. You have to be interested in the children across town," he said. "If you want to be successful in the 21st century, you must be able to work with people of all races and creeds."

As a result, a successful life, whether it's personally or professionally, means a diverse life.

Don't be afraid to fail, he advised the students in the audience, citing the book of Joshua from the Bible. In the story, Joshua led his people into the land of Canaan after Moses failed. "You must become the Joshuas and Joshu-ettes, to lead your classmates at the University of Georgia," he said to loud applause.

Following Thurmond, Early spoke to the audience, referencing a painting given to her the previous day by Athens artist Broderick Flanigan and humbly accepting the praise that Thurmond gave her. With a degree in music education, Early is an alumna of the Graduate School, the Hugh Hodgson School of Music and the UGA College of Education.

"Back in 1962 I never would have imagined a lecture in my honor, or a tree planted in my name at the music school, or a professor (in the College of Education) named in my honor," she said. "I have been overwhelmed by things that are good."

Early issued a challenge to the students in the audience, citing the poem "Dreams" by Langston Hughes. "So I say to young people, hold fast to your dreams," she said. "My dream is that UGA will grow in diversity to reflect the diversity in this state."