Day on campus teaches kids to be language leaders Paul Duncan held a leaf up for the seventh-graders to inspect. His fingers pinched half of it, while the lower half seemed to dangle in air below. 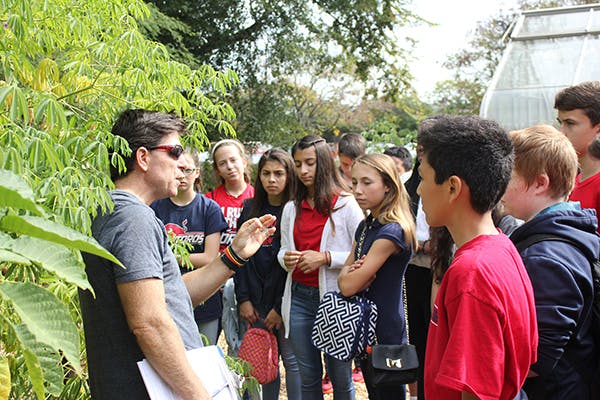 "Is it magic?" he asked as the students, all from World Language Academy in Flowery Branch, stared in amazement. They began plucking their own leaves from the tree, a form of dogwood that grows in Central America, to investigate how the leaf's invisible fibers seemed to defy gravity.

The lesson under the tree by Duncan, associate director of the Latin American and Caribbean Studies Institute at the University of Georgia, was one of several new discoveries the World Language Academy students made while on a recent trip to the Athens campus. The day brought students through several lessons that touched on their lives at school: Plants of Central and South America; an introduction to the UGA program in Portuguese and an introduction to UGA's Costa Rica campus; and a new way to explore classroom discussions with English-language learners.

Portuguese is a "foreign language" option for students at World Language Academy, who already spend part of the day studying in Spanish or Chinese. The plant knowledge will be useful when students take the annual seventh-grade trip to UGA's Costa Rica campus in May, as plant biology is a large part of their curriculum. But it was the classroom discussion lesson that was a first for the middle-schoolers — although even then, they were on board with the idea.

"We were learning about how to properly listen. That's very big at our school, because our school is all about being open-minded and open to different opinions and cultures," said 13-year-old Brandyn Peterson as she and her friends sat down to have lunch at the Tate Center on the UGA campus.

The other girls around the table agreed. "Sometimes people focus on what they believe, but at our school we learn to break through that barrier," added Alana Veiga, 13. "That will help us when we're adults. It's very important for us to learn that now."

But the discussion that morning, led by Ysheena Lyles and Clarence Brantley, teachers at Bear Creek Middle School in Barrow County, did more than encourage students to work together to solve problems. Lyles, who teaches seventh-grade language arts, challenged the students to work in small groups to write a paragraph comparing symbolism found in a poem and a song; Brantley, an eighth-grade social studies teacher, asked the students to create an argument for the motivation behind European exploration.

It was the way Lyles and Brantley drew the information out of the students that made the lesson innovative. They used a method of teaching called "instructional conversation" that is being taught to teachers through UGA's Center for Latino Achievement and Success in Education (CLASE). Working in small groups, teachers present information to students — for example, Lyles gave students a poem and a song — and assign the project. Then, teachers ask a series of open-ended questions aimed at steering the conversation among the students as they reach a consensus.

Along the way, each student is encouraged to express their own opinions and arguments, supported by citing textual evidence, and keeping in mind goals they have set for themselves and the group. When the group comes to a consensus, the teacher not only has an idea of how each student digested the material — because they heard the discussion — but also the thought process behind the finished product.

"This concept was new to them," said Lyles. "Once they got rolling, I saw them growing leaps and bounds with their conversation and others at the table. My own students have said that — 'It gives me an opportunity to know what my classmates think.'"

Paula Mellom, associate director of CLASE, said teachers can take this instructional framework one step further by introducing content into the lesson that identifies with students' cultural heritage. In this way, you're further drawing students into the conversation by using characters or ideas they are familiar with.

"For example, if you're teaching about exploration and colonization, you can bring in content about Latin America," she said.

The IC framework also allows students to set goals for the discussion, such as speaking up more or contributing more to the group's debate, and also set goals for the group as a whole. After the project is finished, the teacher can then use the evaluation as an additional tool to allow the students to reflect on the topic, their understanding of it, and how they can do things differently next time.

The lessons introduced to World Language Academy students are available to any teacher for free through the Latin American Caribbean Studies website (www.lacsiuga.org). Lyles and Brantley created the lessons as part of a grant-funded project that is a partnership between LACSI and CLASE.

But the benefits of the lessons extend beyond English-language learners, Mellom said. The framework the World Language Academy students learned also teaches important concepts such as framing an argument, listening to others and learning from a "productive struggle" — or, coming up with an answer for a question that has no one right answer.

The time for "instructional conversation" also served as a bridge for the World Language Academy students as they dabbled in Portuguese and the plants of Costa Rica. Laurie Brown, a seventh-grade science teacher at World Language Academy, said many of the students on the field trip were also going to be traveling to Costa Rica in May, where many of the lessons focused on plant biology — a key component of seventh-grade science standards.

Understanding that the plants have uses beyond beauty — or even food — will help give the students a deeper understanding of the natural world when they arrive in Costa Rica. Just as their discussions about Hispanic literature and culture in other subjects will help them gain a greater understanding before they make the trip.

"When you see your kids respond to this — it makes a difference," added Brantley, who first learned about the "instructional conversation" method during a summer workshop hosted by CLASE. "Being a part of this has been really great because it's a good tool to have."