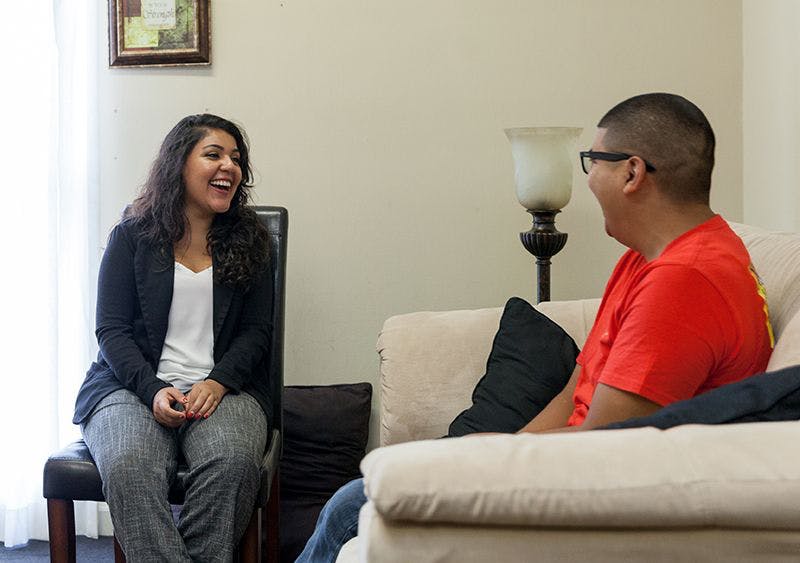 Instead, his first semester as a doctoral candidate in counseling psychology began by diving head-first into both his studies and the community. Not only did Atilano make quick connections through his advisor, professor Ed Delgado-Romero, who is plugged in with several counseling programs around the Athens area, but Atilano also explored many corners of the county through his assistantship with the Latin American and Caribbean Studies Institute (LACSI) at UGA.

When he arrived at LACSI, Atilano became part of a first-of-its-kind study looking at barriers to access for the local Latina/o population. With an interest in counseling and experience in research, he began working with study author Alejandra Calva, community relations manager with LACSI, to survey hundreds of local residents.

The study, which was released earlier this month, found the area's Latina/o community had five major barriers affecting their quality of life: Immigration issues, language, cost of services, a lack of news and information, and transportation. The study was the first to assess these barriers for the local Latina/o population.

For Atilano, it was a chance to hit the ground running and learn a lot about the community he also serves through his graduate work.

"I helped with focus groups, and we went to parks, the flea market, neighborhoods—we went where the community meets," he said. "We gathered information and analyzed it, and I also helped with gathering information that's already out there."

In the end, Calva collected surveys from more than 300 Latina/o residents living in Athens-Clarke County. She said she hopes the study will help to inform private, nonprofit and government agencies locally and statewide about the issues that affect this segment of the population. (See the full survey results.)

"Truly understanding what their needs are and the barriers they face when trying to access existing services for themselves and their children is a cornerstone to the development of relevant programs and policies that affect their overall well-being," said Calva in a news release announcing the study. "The best way to find out what they're dealing with every day is to simply ask them and truly listen to their responses."

The experience also gave Atilano added insight into his graduate studies. His own research focus is on Latina/o students in college, but he fulfills his graduate practicum requirement by serving as a bilingual counselor at Mercy Health Center, a nonprofit health clinic that serves the area's uninsured population. Now that he understands more about the community's needs, he said, it's given him added perspective on the issues that face his clients every day.

"We will have (client) no-shows, and now I understand why that might happen," he said. "At the same time, I know there is a need to go out into the community and promote our services."

"Just by going through these data, it helps—and not just because it gives me perspective, but because of how my assistantship and my graduate studies overlap."

Calva added that having Atilano help with her research was invaluable. "Being a student who knows the process, can speak Spanish, and is focused and with us a set number of hours a week," she said. "It's been great that he's learned about the needs of the community—and that there is a need in the community for counseling."