Cheri Leavy wants you to be a success. And she will work as hard as she can from behind the scenes to help make that happen. 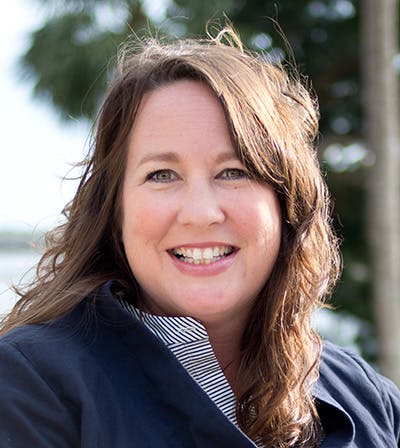 That's because Leavy (B.S.Ed. '97) has a talent for turning passion into something tangible—all while deftly managing a slew of publication interns and leveraging the expertise of those around her to create success stories. This talent surfaced when she was teaching English and editing her students' literary magazine at a Brunswick County, Georgia, high school. Today, she has found balance in a publishing career that spans traditional and non-traditional media.

"I'm still teaching, although I may not be in the classroom," she says. "But I'm passionate about helping female entrepreneurs with branding, social media, traditional marketing, and how to pitch to the media. So I haven't really strayed very far from my major."

After several years of teaching, Leavy reached out to her friends at the local newspaper, The Brunswick News, with an idea: Would they be interested in publishing the writings of students from across the county? Soon, not only was she editing pieces for the paper, but she began coordinating the Newspapers in Education program to use newspapers as a teaching tool.

A fifth-generation native of the St. Simons area, Leavy then leveraged her deep knowledge of Georgia's Golden Isles—as well as her sense of style—as editor of Coastal Illustrated, a magazine that covers the area's social scene. The success of Coastal Illustrated led to two others: Bulldawg Illustrated, which focuses on Georgia football social events, and Guide2Athens, a guidebook focusing on businesses in the Athens area.

And in the midst of launching the Athens-based publications with her husband, Vance, Leavy partnered with friend Whitney Long to launch a website and annual conference focused on Southern artisans, entrepreneurs, and trendsetters: The Southern Coterie (or "Southern C" to its fans). By leveraging digital media and combining it with an annual conference, The Southern C is now a springboard connecting Southern entrepreneurs and artisans with emerging and established brands, bloggers, and magazine editors. "We want to help connect them to the right people and to work together, because we're about community over competition," says Leavy.

Her leadership from behind the scenes is evident through her sense of style, her involvement in her hometown (and her "adopted" hometown of Athens), and her love of UGA. She now serves on the University's alumni board.

"I like to build people up, which is why I like to teach to begin with," she says. "But everything I've done along the way are things I'm passionate about. I'm always trying to give people more education and confidence."