The two-day event brought elected officials and staff to UGA for a two-day tour of research with ties to federal funding. One stop at the new indoor practice facility featured UGA football coach Kirby Smart and an introduction to issues surrounding athletes and concussions by Ron Courson, senior associate athletic director for sports medicine for UGA Athletics. 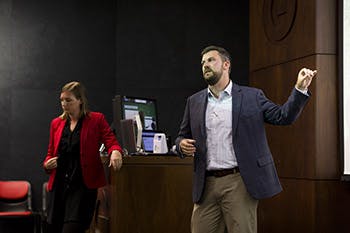 Here, faculty in the UGA College of Education's Concussion Research Lab, which has grants from the U.S. Department of Defense and other national and state institutions, used the opportunity to present some of their latest research to lawmakers.

"We want to study the entire continuum of concussion, from start to finish," said Julianne Schmidt, an assistant professor in kinesiology and co-director of the lab. While other colleges might focus on one aspect of concussions, her lab takes a broad approach. "We decided we would be limiting ourselves if we didn't."

Schmidt and lab co-director Robert Lynall, assistant professor in kinesiology, outlined several ongoing and new projects they and their research team are undertaking. Some are more broad¬—such as the data collected by the lab as part of its NCAA-DOD Grand Alliance grant—while others, such as a new study this fall looking at youth football, are narrower in scope.

Lynall detailed a few specific research projects that examine concussion prevention. Because the positive aspects of sport outweigh negatives, he said, it's important to investigate ways to make a game as safe as possible. With much of the focus on concussions in recent years focusing on professional football players, Lynall said their lab wants to now focus on concussion risk among younger players. In a study launching this fall, researchers will work with several youth and flag football teams—teams for 9-year-olds and middle-schoolers—to record perceptions of concussions and actual head impacts throughout the season.

Another recent project that is moving into a new phase focuses on concussion reporting. Fifty percent of concussions go unreported, said Schmidt, but a new study with the NCAA aims to reduce issues athletes might have with seeking help after a head impact. "The battle is fighting these cultural issues that keep people from reporting," she said. "Through this study, we are looking at what is it that keeps athletes from reporting."

The lab is also part of a nationwide alliance collecting data on concussions and head injuries. The NCAA-DOD Grand Alliance: Concussion, Assessment, Research and Education Consortium grant involves a series of concussion evaluations, testing all athletes to create baseline standards. As a result, UGA has helped create the largest data set for concussion-related injuries.

Schmidt also noted that in addition to concussion prevention and reporting, the lab is also looking at what happens after a concussion. These are issues faced by athletes and non-athletes alike, such as driving a car or getting quality sleep.

"Fifty percent of people never intend to modify their driving," she added, noting that results from one study showed participants, while using a driving simulator, had movements more on par with a driver who is intoxicated even though their concussion symptoms had cleared.

And beyond prevention, reporting and recovery, new technologies now coming to the Ramsey Center lab will allow the team to investigate further into the role other movements play in causing or preventing a concussion. The recently renovated Biomechanics Lab adjacent to the UGA Concussion Research Lab features high-speed cameras and other technology to measure the effects of a concussion.

This lab is one more feather in the cap of a concussion research team that is among the best in the country, according to Courson.

"All of our sports are great—we have 600 athletes in 21 sports, and we want to take care of them," he said. "We are so blessed here at Georgia to have Julianne, Rob and their team here."