If there's one rule about entertaining guests, it is this: Avoid talking about religion, politics and sex.

Unless, of course, your guests are visiting to talk about these topics—which means the conversation will quickly get interesting.

This was the case recently when a delegation from countries in southern Africa arrived at the University of Georgia College of Education. All had made a name for themselves in their home countries working for gender equality and human rights, and now they were looking for inspiration from the other side of the Atlantic.

"I got more than I thought I was going to get," said Nalumino Likwasi, co-founder of Women's Alliance for Equality in Zambia. "I was expecting a certain level of something, but I think I've had my mind blown by this whole experience and meeting all these different people who ultimately contribute to this one goal—it's been really amazing."

The visit was part of the Faith and Human Rights Exchange Program, sponsored by the United States Department of State. As part of the program, four community leaders spent 18 days meeting with faith and LGBTQ+ leaders across the country. They stopped in Athens near the end of their journey to discuss faith, legislation that affected LGBTQ+ populations and ideas to spark difficult conversations with those who might not be on board with talking about gender identity and sexuality. 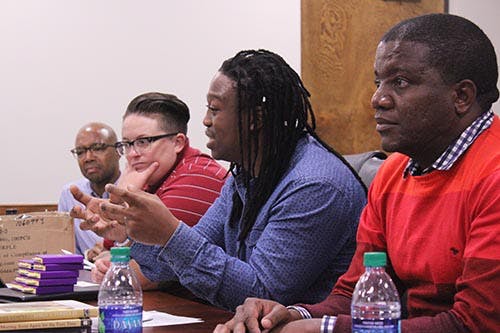 During several hours in a conference room at Aderhold Hall, Likwasi, Ian Phiri of Malawi, Lukas Mukongo of Namibia and Motsau Arnold Asa Motsau of South Africa talked about ways they engage with people in their countries to discuss gender identity and acceptance. In many cases, they noted, adding the western labels of "gay" or "lesbian" added a degree of foreign formality to something that was defined differently within a specific village or culture.

Mukongo, for example, recalled a time he was speaking to a church congregation about gender diversity. Adding the terms "gay," "lesbian" or "transgender" stigmatized a subject that the members knew—they simply had another way to define it.

"I know a lot of spiritual healers who, in our western framework, we will term them as gay. But they will say no, this is a gift from the ancestors—someone would be inhabited by a male ancestor and they get that ancestral spirit," he said. "We would say, 'This is a lesbian,' but they do not understand that at all. ... But if I use the vernacular, people walk away like, 'Oh, OK.'"

It's a similar concept when talking about sex in villages across Africa, Mukongo added. Many people are open about talking about sex, but they use metaphors instead of the more direct western terminology.

This concept of meeting people on their terms—describing concepts within terminology and vernacular that makes them feel comfortable—added a new perspective to the Americans in the room, who came from varying backgrounds in and outside higher education.

Damon Woods, a former Department of State employee who was traveling with the group, agreed. Originally from West Virginia, he recalled the way his older family members and others in his community accepted their transgender hairdresser. "They don't want to hear about the gay couple, the lesbian couple," he added. "But did they ever know a man who wore a dress? Of course they did. But if you say 'transgender,' they say oh no—but they know."

Anneliese Singh, professor and associate dean for diversity, equity, and inclusion who hosted the delegation, noted that this issue of communication is critical when researching the LGBTQ+ population. In many cases, data sets for this population are only just now being created, and there are issues of terminology and reporting that can affect how new information is gathered.

In particular, in some faith communities, there is no discussion of LGBTQ+ issues, period. And if this influences the larger public health community, it could stunt information gathering in the future. "I'm thinking about education differently based on what you all have shared, and some of the strategies that we might shift," added Singh, who is part of a five-year national, longitudinal grant project exploring the resiliency of transgender people. She also works to educate counselors on the concept of "affirmative counseling" for transgender and gender nonconforming clients.

But while the conversation around the conference table allowed the African visitors to share their stories, the visit was also a time for them to learn from the Americans. Along with Singh, UGA representatives also included Meg Evans, director of UGA's LGBT Resource Center, and members of the community who discussed their own struggles to teach gender diversity.

While the African delegation shared their own insights about teaching LGBTQ+ issues, University of Georgia representatives contributed their own perspectives. The Rev. Renee DuBose, the outgoing pastor at Our Hope Metropolitan Community Church in Athens, explained the extensive research and experience she has had over the years pursuing equality for same-sex couples, and the ways religion mixes with politics in the South.

A native of Mississippi, DuBose grew up in an evangelical church. She experienced a "transformational" moment in the 1990s, she said, when she realized that as much as she valued her faith, people could value other faiths equally. "We are all on a journey, and I'm not here to negate anyone else's journey," she added.

Her stories of social justice, along with others in the room, gave the African visitors a glimpse into the struggles going on in the South and across the country. For the visitors, the experiences were eye-opening, and inspired them to return to their countries with new tools to address similar issues there.

"We came here to exchange our practices on gender, sexuality, research and so forth, but we've seen so many different things, at least for me, about how we should do this," said Motsau. "Everything was more than what I expected, and I can go home challenged."

And despite being separated by an ocean, the two parties found common ground in their shared understanding of gender identity, as well as their desire to educate others about the diversity around them.

Obviously, said DuBose, there is still work to be done. But by building coalitions and aiming to understand each other, bridges can be built.

"Any coalition that hopes to be built has to come to the table and say, 'I know some things but I don't know everything. How can I learn from you?'" she said. "But I think what unites us is greater than what divides us."