The pavement that divides the University of Georgia campus from the Parkview Homes public housing neighborhood is narrow—a two-lane street at most. But the perception of separation between the two communities could be an ocean. 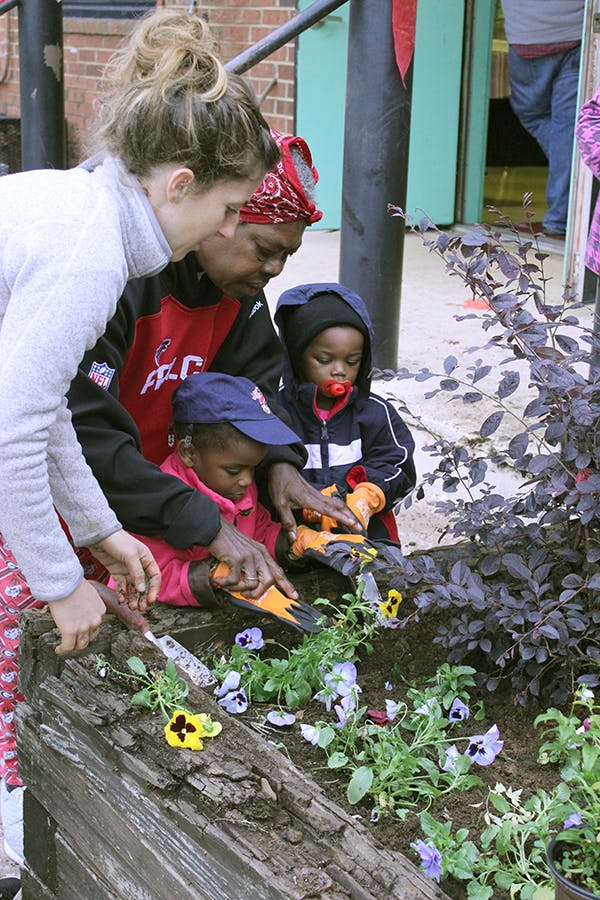 Now, a new partnership between the UGA College of Education, the UGA College of Environment and Design and the Athens Housing Authority aims to bridge that gap. The goal is to create a slate of programs in Parkview's community center that will benefit neighborhood residents while giving UGA students the opportunity to connect with the community.

Along with plans for classes to take place in the community center starting in the spring semester, faculty and students are also listening to residents to understand their dreams and concerns. The plan kicked off last month with an event to re-introduce neighbors to the space.

"We're opening it and we're getting input from the community. We wanted to get people in and let them know it's open," said Ruth Harman, a professor in the UGA College of Education's department of language and literacy education. She is one of two professors who have stationed their First-Year Odyssey seminars at Parkview's community center to help clean and brighten the space, readying it for the next step in the partnership.

During the November event, a DJ spun tunes while kids played basketball behind the building. In front, more children helped plant flowers and bushes around the entryway. Inside, along with laying a fresh coat of paint and giving it a good cleaning, students worked with Parkview residents to create a mural on one wall. Against another wall was a floor-to-ceiling whiteboard inviting residents to contribute their ideas.

From there, faculty and staff at the College of Environment and Design's Center for Community Design and Preservation will begin brainstorming with students to develop a plan for sustainable programming that meets residents' wishes. The plan, added Harman, is to start small but stay focused. This allows the UGA partners to roll out ideas—for example, a semester-long class that incorporates children from the neighborhood—that are not overwhelming.

And because in the past, so many organizations have come to the community center with programming—and then left—it was important to all the faculty involved that whatever they create, it remain a consistent part of the neighborhood into the future.

A spark of an idea 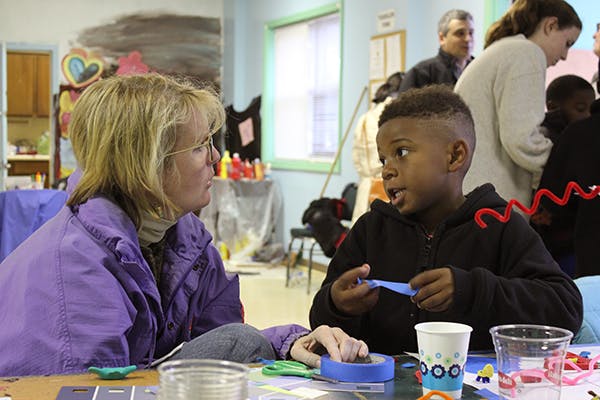 All places have stories, including the four walls comprising the Parkview community center. Faculty and students explored this history over the past two years with students taking part in the College's Camp DIVE summer program.

Using a format of teaching literacy called youth participatory action research, or YPAR, middle-schoolers were tasked with photographing spaces and places in their lives that evoked certain emotions, including the community center. Kevin Burke, an associate professor in the College's department of language and literacy education, was among the faculty working with the students and helping them tell the stories of this and other places in their lives.

"Part of our job was to get the kids in the space, and also, how do we foster conversations in the community center about what they want in that space, how it looks now and how it might look differently," said Burke. "And how do we advocate for that?"

As part of that conversation, doctoral student Jason Mizell learned from a student that there was no programming in the community center—it was just an unused space. But, the student said, out-of-school and after-school programs were essential to keep neighborhood kids engaged and out of trouble.

Perhaps, she asked, could Mizell, Burke, Harman and others help the kids in the neighborhood?

Two years after she proposed the idea, the university and the city signed a memorandum of understanding that allowed faculty to use the space. Now that the groundwork has been laid, the fine-tuning begins.

Resident-led process With the large number of children in the neighborhood, many residents' thoughts offered during the November opening event for the community center turned to after-school activities or opportunities for preschool-age children.

"I'm a mom with young children, and I'd like something for younger kids," said resident Keri Jones, who has two children, ages 3 and 4. "They are home all day and I want there to be something here for those of us who don't have cars or transportation. This would be a good place for them to go, especially during the day or after school." 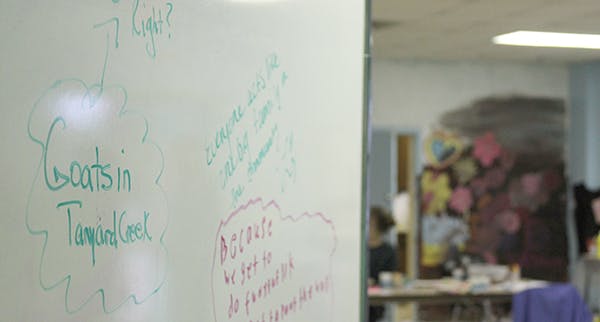 And these resident-led ideas are exactly what faculty want to encourage. Pratt Cassity, director of public service and outreach for the UGA College of Environment and Design, along with Melanie Bowerman, project coordinator for the College, are leading a team of students to help with the project. But in this case, rather than move walls and re-envision the physical space, the team from the College's Center for Community Design and Preservation is looking at sustainable programming options that blend resources from UGA with the desires of residents.

"We got hooked up with Ruth (Harman) because they wanted to start this project and needed help with the community outreach portion—and then it's turned into something long-term," said Bowerman. "Designing a program that is long-lasting is really going to be helpful. And I think for us, designing how we engage all kinds of people who live here, not just the kids, that's absolutely what we do."

Listening to the residents, added Marilyn Appleby, marketing and communications director for the Athens Housing Authority, will go a long way in creating programming that is popular as well as sustainable.

"We have had a variety of organizations (offer programming) in the past, but we really have not had any consistent programming for a couple of years now," she said. "So by having the College of Education come in and provide a variety of activities, from education to even just talking to the parents about what they would like to see for the children, is just a great thing for us."

"You can't just come in and have a plan, because that might not be what people want to be participating in," she added. "The important thing is, nobody asks our residents what is important to them. Here, we had a group of people from the University where that was the first question."

Building from scratch The project's success at this point is thanks to the work not only of faculty and graduate students in the two colleges, but also UGA freshmen taking First Year Odyssey seminars. Students in Harman's course, "Building Youth Art Communities: Dismantling Walls," were instrumental in prepping the space. Cassity also teaches a yearlong First Year Odyssey course that is helping with plans for the community center's use and hosting charrettes.

The team has already hosted one weekend design charrette, which included residents, students, faculty and staff. In the spring semester, Bowerman said she hopes to bring a class out to the community center each month while a sustainable after-school program is designed.

Harman said other faculty have expressed interest in holding classes at the center—for example, a theater class or a cycling class could include neighborhood kids in the activities—and there are also opportunities that may form through the UGA Reading Clinic or Camp DIVE.

"Or, because my program is at Coile Middle School, we might have one or two sessions here. We stage it so it goes slowly but grows in an organic way," added Harman. "The main thing is starting slow, gaining trust and seeing what people want."