It's not easy to uproot your family to take a leap of faith into a doctoral program.

But Matthew Moulton had a feeling. So far in life, that gut instinct has served him well—it took him to a hurricane-scarred Houston where he realized his passion for working with middle schoolers. And so far at UGA, that instinct has paid off not just in his classroom experiences but also in financial assistance. 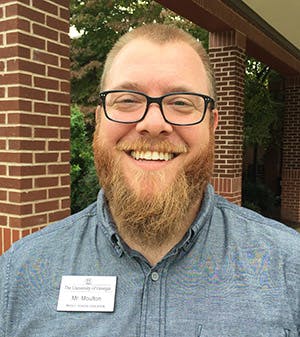 "My family and I, we chose the University of Georgia because of its campus feel. And we wouldn't have been able to make that move without financial assistance," says Moulton, a doctoral student in the department of educational theory and practice. He has received four scholarships in addition to his assistantship, and that financial help made it possible for him to focus on his research and dissertation during his final year of the program. "These scholarships have been absolutely instrumental in being able to relieve anxiety while working on studies or traveling to conferences to represent myself and the University of Georgia."

Moulton's research focuses on middle-grades youth who are experiencing homelessness. It's an interest he realized while teaching at a junior high school in Houston, where he went to work after receiving his undergraduate degree.

Originally in the city to help with relief efforts after Hurricane Ike, Moulton decided to put down roots. He received his teaching certification and began working with ninth-graders. Later, after moving to a new position at a junior high school, he saw one of his students dropped off in a school district-issued car.

He offhandedly joked with the teen about his "chauffeured" ride—but the comment struck a chord with the student. He told Moulton that his mother had lost her job and they were living in a family shelter miles away from the suburban school he attended. The district continued to provide transportation and the student swore the situation was only temporary—but it was still a lot of stress to carry.

Moulton realized nobody at school knew this student's situation. He wondered how many more were like him?

"This kid had been existing under this veil in my classroom, and here I was with this antiquated idea of homelessness," said Moulton. That experience was a turning point, and Moulton started to see his students not just through an academic lens, but through a kaleidoscope of life experiences.

He went on to receive a master's degree in counseling, and then came to UGA because of the experiences the doctoral program offered—namely, working in local middle schools through the Professional Development School District and learning from experts in middle grades education such as his advisor, Gayle Andrews.

"My goal is to help seek out venues where kids can be added to these conversations about homelessness," he said, noting that often the stereotypical image of a middle-aged white man is far from reality. "The majority of those experiencing homelessness is single mothers, and young adolescents rarely have their voices heard in that conversation."

As he nears graduation in May, Moulton is thankful that he has been able to gain the experiences he has. Andrews, a professor in the department of educational theory and practice, is inspirational, he said, and his UGA experience has allowed him to work with students and gain valuable research skills.

Thanks to donor support, students like Moulton can focus on their education—and experiences that can only be had at UGA—and graduate as leaders because of it. Donations to need-based aid in the College of Education help both undergraduates and graduate students achieve their dream.

"I've been given so much through this scholarship in the College of Education, and I look forward to being able to give back to future teachers that I teach one day in a higher education setting," added Moulton. "I'm very thankful for the opportunity provided by the University of Georgia to lay that foundation."