Confined to the "written word," four shadowy figures emerge from a pool of darkness—each representing a different historical period that would eventually shape and define today's literacy practices. 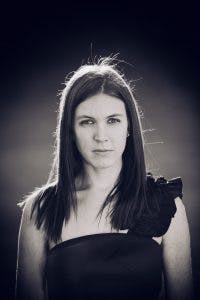 While studying at the University of Georgia's College of Education, doctoral student Rachel Sanders noticed a glaring paradox in the field of new literacy. Although often discussed and recognized, new literacy scholars who emphasize the importance of broadening the term "literacy" beyond just the written word repeatedly present their findings through traditional, written methods.

In response to this contradiction, Sanders presented her doctoral defense in a format solely outside the written word to practice her new literacy skills and enhance the public's understanding of how people communicate with each other in the age of technology.

"We understand that text is not limited to the written word," said Sanders. "We can read bodies, we can read clothing—you're taking away meaning from something that someone has encoded, and now you're decoding it, but it doesn't necessarily mean that it's in the shape of a letter."

Interweaving art, fashion and texture, Sanders' public popup exhibition at the Georgia Museum of Art takes visitors on a visual journey from the constraints of traditional literacies to the diversity and freedom of new literacies.

On one side of the exhibit, four mannequins spell out the word "text" with their contorted bodies enclosed by life-size brackets, while on the other side, a woman in a glittering red dress emerges from a scattering of oozing black letters that spell out the phrase "words matter."

She represents the rise of new literacies and the freedom to communicate with more untraditional methods, such as graphic novels, videos, clothing and more. This freedom, said Sanders, also translates to the classroom where teachers can express concepts and ideas through a variety of media—not just the written word or a physical book.

"We're engaging with all these forms and modalities, and we're telling our preservice teachers that they need to bring that into the classroom and to encourage this with their students," she said. "But if you look at the classes we're taking in higher education, you're not seeing the same thing. Even when we're writing a publication, we're still using the written word, and I noticed this irony in scholars who are arguing for new literacy but doing it in a written way."

The figures in the exhibition, which each embody a historical moment that affected traditional literacy practices, are covered in textured cardboard and black ink. From the effects of the Bubonic Plague on the printing press to the Salem witch trials and the American Revolution, the mannequins express the constraints of traditional literacy practices, which gives privilege to the written word and how such cultural practices have marginalized women throughout history.

The argument Sanders makes is not for the end of the written word, but for educational practices to become more inclusive of diverse literacy forms.

Sanders' exhibition, titled "[Text]ure: Weaving Together an Understanding of New Literacies," brings attention to taken-for-granted traditions in education that continue to marginalize individuals through the privileging of the written word, while also addressing contradictions within the field.

"She's doing something exceptionally new for our field," said Donna Alvermann, Distinguished Research Professor and the Omer Clyde and Elizabeth Parr Aderhold Professor in Education. "She stepped out against the grain and it's not been easy. I'm really proud of her and what she was able to do. I don't take any credit at all other than in believing in her because I know her to be a good scholar."

As an artist, fashion designer and female educator, Sanders hopes to bring new literacy studies, femininity and the body to the forefront of academia.