Alumna takes wide-angle approach to new role on school board LaKeisha Gantt knows that when it comes to education, there are a lot of factors beyond our control that shape an ideal learning environment.

Which is why she focuses on the things we can control. 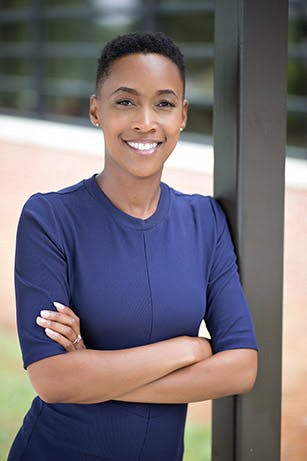 For example, school leadership and discipline procedures are two ways educators can improve school climate, which in turn improves overall student outcomes. "And there are some other things that we can hone in on," she says. "Not that it will speak to all problems. But it helps us focus on the things that we know impact how you feel when you walk into a building."

Gantt views education from this vantage point because that's how she was trained. With a master's degree in community counseling and a doctorate in counseling psychology, both from the University of Georgia College of Education, Gantt can now view education through a new lens: As a member of the Clarke County School District Board of Education.

Gantt was one of two alumnae from the College of Education elected last month to decision-making boards in Clarke County. Gantt won the May 22 election for the school board's district 7 seat, beating incumbent Carol Williams, while Mariah Parker, a doctoral student in the College's department of language and literacy education, won the district 2 seat on the Athens-Clarke County Commission.

Gantt will take her new seat in January, while Parker began immediately.

Running for school board was a natural progression, said Gantt, after years of working in various counseling-related positions in the school district. An Athens native, she began her career after receiving her master's degree working as a career counselor. It was something she could identify with personally, since so many positive influences in her own life—even the push to go to college—came from mentors at school.

"There was so much that happened to me, as a child, that also happened in my neighborhood and my schools—that was where a significant part of my positive influences happened," said Gantt. "It was also pretty significant in shaping what I thought I wanted to do and that final decision to go to college."

While her initial position was grant funded and was never intended to last more than a few years, Gantt knew she wanted to continue to have a positive effect on kids. She returned to UGA to receive her Ph.D., and then landed a new, grant-funded position as a behavioral specialist with the district.

That position eventually became permanent, though, and it allowed Gantt to blend her love of research with a boots-on-the-ground approach to solving the issues children and teens face. "I knew when I was doing it that it was exactly what I was supposed to be doing," she said. In this position, she said, she could focus on research and evaluate the work that she and her team were doing.

"I knew that we were doing some heavy stuff, but we don't always have the resources to evaluate what we're doing," she said. "And a large part of my work became multiculturalism related to behavior—things that teachers had not necessarily been extensively exposed to. I also knew that in addition to the need for empirically supported work, and evaluation of that work, that there was a disconnect between policy and practice."

Gantt was technically an employee in the school district office, but her work took her out of the office and into the classrooms. As a result, she saw where there were gaps and needs. And the glimmer of an idea first sparked: What if she ran for school board?

"But I didn't feel like my work had come to a place of transition yet," she added.

She continued in that position until 2015, when she left to work at Counseling and Psychiatric Services in the UGA Health Center. The transition gave her time to decompress from the intense work with students, parents, teachers and administrators. As she began to find her footing again, the idea of running for school board came back, this time with an even stronger pull.

This time, she was in a better place to tackle the rigors of a campaign. Now that she's elected, she's taking time to delve into school district policies and reacquaint herself with the organization that is the school district and the policies that help dictate school climate. She also wants to make more connections in the community and help parents and caregivers feel more connected to the school board.

In the fall, Gantt also begins a new position as an assistant professor with Piedmont College, where she will teach in the psychology department. "It gives me a chance to do school work, but also be a part of the development of students interested in psychology and other human service fields," she added.

Her counseling degrees from the UGA College of Education helped give her the tools to not only affect the lives of students and their families, but also to adapt to assisting an organization. It comes down to human behavior, she said, and counseling psychology gives professionals leadership skills that are person-centered and applicable to many situations.

"Often times in schools you're working with people who are not therapists, but counseling psychology gives you some understanding into how human behavior works," she said. "I think my program did a very good job of providing experiences to help me go into many different environments."

The program's training, and the way students are supervised in their work, also helped set Gantt up for success, she said. Transitioning between individuals, couples, groups and even organizations has prepared her for working with schools—a place that could encompass all of those scenarios on any given day.

"All of it is so intricately connected—how do we develop you as a leader if you're pressuring or bullying your teacher? And we can work with teachers and say, 'This is your discipline data, what are your practices?'" said Gantt. "They're connected in such a nuanced way that sometimes we can oversimplify the solutions. And so my program developed the capacity to help me look at the problem from multiple views, and then look at multiple aspects of the problem."