Earlier this summer, 15 educators and community members from Athens, Georgia, walked away from the site of a former slave pen in Montgomery, Alabama, with not only the hopes of creating a dialogue for change, but also a new initiative to commemorate the victims of racial terror lynchings in Athens-Clarke County.

When the Legacy Museum: From Enslavement to Mass Incarceration opened its doors for the first time in late April, University of Georgia College of Education associate professor Jim Garrett and clinical associate professor Sonia Janis saw an opportunity to create a constructive conversation around America's history of slavery, lynching and racial violence.

The two invited a group of social studies teachers and counselors from the Clarke County School District, faculty members from UGA and Kennesaw State University and four UGA doctoral students, on a visit to the museum and its companion site, the National Memorial for Peace and Justice.

"What I think this kind of trip does is build a community where many of us— across contexts between the university, public schools and the counselors' office—are working on the same problem in our different settings," said Garrett, who also serves as a graduate coordinator in the College of Education's department of educational theory and practice. "It's not uncommon that people, especially white people, aren't confronted with the history of lynching."

After spending the afternoon at the two sites, the group reconvened at a local hotel for a workshop to discuss their thoughts on the history of enslavement and how they could contribute to the current conversation on racial injustice.

For Ariel Gordon, a professional school counselor at Cedar Shoals High School, the most striking aspect of the Legacy Museum was the seamless connection it made between Jim Crow laws and the mass incarceration of people of color.

"We navigated the museum and memorial together with an added layer of gratitude and duty," she said. "We know the importance of memorialization practices in our culture and since this memorial is the first in existence to acknowledge the 4,700 deaths of African-Americans through lynching post-slavery, it is both heavy and healing."

For others, like doctoral student Briana Bivens, the two sites served as a pedagogical space for research and discovery. With an interest in social movements and community spaces, Bivens appreciated the Equal Justice Initiative's extensive archival work, which contains the nation's most comprehensive collection of lynching data.

"The memorial was very action oriented," she said. "I appreciated that we weren't just going to observe or bear witness, which I found very empowering. I'd like to see that approach around a lot of things." 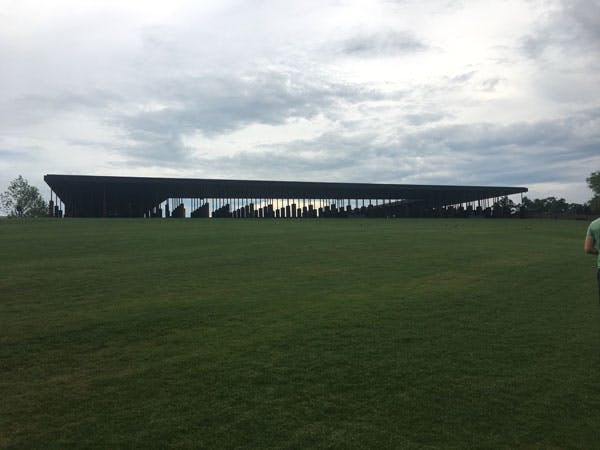 During the workshop, the participants discussed their personal thoughts of the memorial as well as different ways to engage community members in an organized effort. Some of the group's ideas included incorporating community tours into new teacher orientations and researching some aspects of the school-to-prison pipeline.

Additionally, several group members raised the question of how best to approach topics like slavery and civil rights in the classroom.

"This is really hard to do, but it's a good conceptual question," said Garrett. "We need to ask ourselves what ways we can imagine working with students to put them in a different relation to the history that they learned before and one that lends them perhaps to a more immediate consciousness of the problems that persist today."

Kiondre Dunnam, a social studies teacher at Coile Middle School, highlighted the importance of educating children on America's traumatic history of enslavement. In many ways, traumatic events are still occurring in students' lives every day, he said.

"In this age, there's a fear [in African-Americans] that comes with driving a car, shopping in a store or just doing normal activities," added Dunnam. "It's important to allow a space for children who are experiencing these traumatic events and give them a sense of agency and advocacy, so that they may begin to be a part of the coalition the builds up and out of what is sadly sometimes deemed the norm in the United States."

As they descended the walkway of the lynching memorial, the group experienced the magnitude of 800 hanging steel columns from two different vantage points—starting first at eye-level and ending with the columns dangling overhead to symbolize the view of a lynching spectator.

Located just a few blocks away from the museum, each column features the name of an American county and the people who were lynched there. Additionally, the surrounding park is home to 800 identical monuments waiting to be claimed and installed in the counties they represent.

Currently, the group is working on bringing the duplicate memorial to Athens-Clarke County to commemorate the victims of racial terror lynchings. They have already engaged an elected official on the matter and are working on pinpointing the best location to place the new memorial.

"I know people definitely want to stay in touch, especially in this work to bring a column to Clarke County," said Bivens. "At this stage, we're working on getting community input."

In addition to addressing racial justice in their own work, the group aims to claim Clarke County's lynching monument from EJI and install it in a permanent home where it can help local communities engage with history in a constructive and meaningful way.

At the end of the day, what once was an old warehouse where African-Americans were imprisoned and sold at auction now stands as a museum where community members, doctoral students, historical researchers and activists can collectively weave together the narrative of enslavement to today's current mass incarceration problem.

"I am always grateful when a space is created for individuals to openly share their thoughts and feelings, where we hold space for one another and learn from one another's experiences," said Gordon. "Also, from my experience, each time I have been a participant in an organized effort such as this, ripple effects inevitably take place."