Last summer, John Mativo, an associate professor in the department of career and information studies, and several other faculty members and students embarked on a trip to Tanzania. 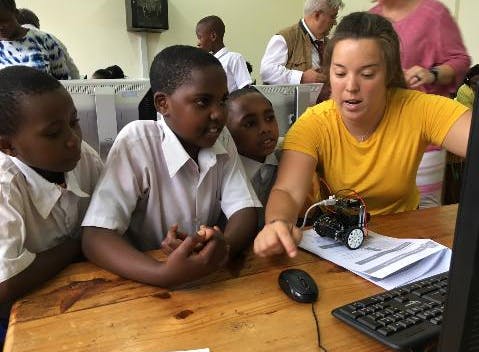 The trip was funded with the support of a Fulbright-Hays Group Projects Abroad grant awarded to the University of Georgia’s College of Education. The study-trip focused on immersing participants in the language and culture of Tanzania while also offering educators the unique opportunity to learn about STEM education in another country.

The four-week trip, which included workshops with Tanzanian educators on robotics education, received national recognition and was covered in the October edition of the U.S. Department of Education’s International and Foreign Language Education newsletter.

Mativo, whose research focuses primarily on workforce education and engineering, said that national recognition is a stepping stone to improve education worldwide.

“[It] shows that an effort was made to reach out to empower children in developing countries to seek an informed future,” he said. “The interest was established, now growth is critically needed.”

The College of Education created a video playlist that documented the trip, which may be viewed on Youtube.