Bigelman, who serves as a lead for the Holistic Health and Fitness Program (H2F), said the Army established the program in October 2020.

“The Holistic Health and Fitness System is the Army’s primary investment in soldier personal readiness, optimal physical and non-physical performance, reduced injury rates, improved rehabilitation after injury, and increased overall effectiveness of the total Army,” Bigelman said. “The system empowers and equips soldiers to take charge of their health, fitness, and well-being to optimize individual performance, while preventing injury and disease.” 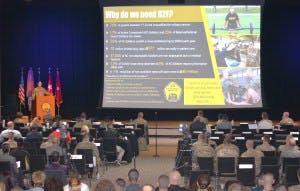 A document outlining the program lists musculoskeletal injuries and chronic sleep deprivation as factors contributing to soldier readiness. Bigelman said the program aims to bring a cultural change to soldier’s perception and training to improve their health and fitness.

“We ask soldiers to optimize their individual physical, sleep, mental, spiritual, and nutritional readiness,” he said.

Gist, who serves as the head of the United States Military Academy’s Department of Physical Education, oversees the program in action.

“Within our seven-course curriculum, we specifically use a three-course sequence to introduce and apply H2F concepts,” Gist said.

Those courses are Foundations of Personal Fitness, which lays a foundation for personal fitness through physical, nutrition and sleep readiness; Military Movement, gymnastics-based physical activity; and Army Fitness Development, where cadets apply what they’ve learned through designing programming of physical readiness.

Bigelman said the program also established H2F Performance Teams (HPTs) across the Army, a system that has not existed in the Army before now.

“The approach we are taking is similar to how professional and collegiate sport teams take care of their athletes,” he said. 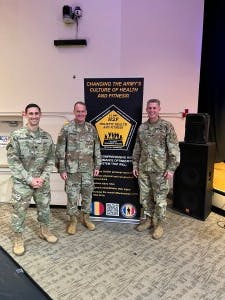 Both Bigelman and Gist were advised by Kirk Cureton, professor emeritus in the Department of Kinesiology, for their Ph.D. programs. Cureton said he was pleased to see their leadership in the program.

“It’s wonderful to hear that Kevin Bigelman and Nick Gist, two UGA Kinesiology Ph.D. graduates I mentored, are leading the implementation of the Army’s new Holistic Health and Fitness Program,” Cureton said. “This effort reflects an extensive expansion of the Army’s training of soldiers in the areas or health and fitness, and it is nice to see the education they received at UGA have an important impact.”

Bigelman and Gist spoke at the Holistic Health and Fitness Industry Day and Exposition on April 26-27 at Fort Eustis in Newport News, Virginia, along with Lieutenant Colonel Nicholas Barringer (B.S.F.C.S. ’03), director of the U.S. Military-Baylor University Graduate Program in Nutrition.